HYDRA - written by Rachel Perks and directed by Bridget Balodis

It may be unsophisticated to throw a few exclamation points early into this response but I loved Double Water Sign’s HYDRA!!! I want to say this upfront. Partly because I’m a person that usually has a ho-hum mild response about most things in life, and partly because, well, why not exalt a work in simple terms. In this production of HYDRA, there was a deeply gratifying, elegant harmony between the design choices, directing, writing and performance.

Ok. Now for the longer response.

This is a two-hander play, largely set in real time and in one space. As most playwrights will probably tell you, this can be the peak writing challenge. Because: you have to create one continuous moment that establishes characters and world, raises stakes, keeps you interested in the characters, feeds you enough exposition. It’s bloody hard work and Perks pulled it off with aplomb, inserting exits/pauses as needed, but generally holding the two characters in the same space. For the bulk of the play, we’re with two people who meet each other for the first and only time – the giving consultant Anita (played by Sapidah Kian) and her client Bowen (played by Casey Filips). We meet them in a rundown consulting room that reminded me of the social services office that opened up between the Woolies and the discount pharmacy near my house. It’s in the convergence of details in the set by production designer James Lew. The consulting room is bare, the carpet is nondescript, there are faint scuff marks on the wall that haven’t been painted over, and a small patch of fluorescent lighting hangs low in the room – a simple, effective gesture from lighting designer Amelia Lever Davidson. It altogether feels like the room has been constituted of cheap, functional materials because there isn’t much money around in the world Anita and Bowen live in. The atmosphere is one of a low-level constant hopelessness, accentuated by the sound design, a foreboding composition by sound designer Daniela Esposito that’s present for the whole work, under-scoring the performances without intruding on them. In the world outside of this room, we learn that there’s a water crisis linked to a world event called ‘automation’ and such is the striking effect of this event that people now organise memories of life pre-automation and post-automation. The outside world leaves enough room in your imagination to fill in the gaps while giving you enough specificity to understand the microcosm of society within the room.

Anita is here to do her job, which is to ensure that Bowen consensually sees through what he’s come to do, which we learn is to give up his life in an act of ‘heroic’ community service so that the water in his body can be harvested and used as society most needs. Anita is seasoned at her work and knows that the best way to get full commitment from the typically male client is to do what women often do to negotiate successfully with men – downplay our smarts, diminish ourselves, construct ourselves as relatable female figures (the friendly every-mother in Anita’s case). Bowen hates himself but isn’t so aware as to know that he hates himself; his anger becomes externalised. It’s in the computer games he talks about playing endlessly, his underlying un-processed rage at his actual mother and his sister.

Both Sapidah Kian and Casey Filips inhabit their characters without affect, grounding them as real people. These are jagged roles many actors would delight in exploring; Casey Filips’s depiction of Bowen could have veered into a one-note incel-type young man but he gave me the grunt wrapped up in pain and confusion. Sapidah Kian’s Anita was at once impenetrable and deliberately performative. I sensed the toll of the work on her but the satisfaction of the momentum of the work, especially when one is good at their job. Rachel Perks releases plot and character information at a well-measured pace so we’re always with the characters but also a little ahead of the predicament. Bridget Balodis directs the performances so the tension remains taut and dialed up, near to but never in reach of relief. The danger was in the despair and the inevitability of where Bowen would end up, rather than physical violence towards Anita. This is nuanced crafting, supported by performance dramaturgs Kamarra Bell-Wykes and Georgina Naidu. Altogether, the experience was less about sharp twists and turns, but walking the path to a foregone conclusion; we see a stripping away of Bowen, giving us enough insight into this young man and watching him eased by Anita towards his death. This was more satisfying for me than adding in unexpected story or plot reveals. The work tapped into the very real fear of death, of life without purpose. 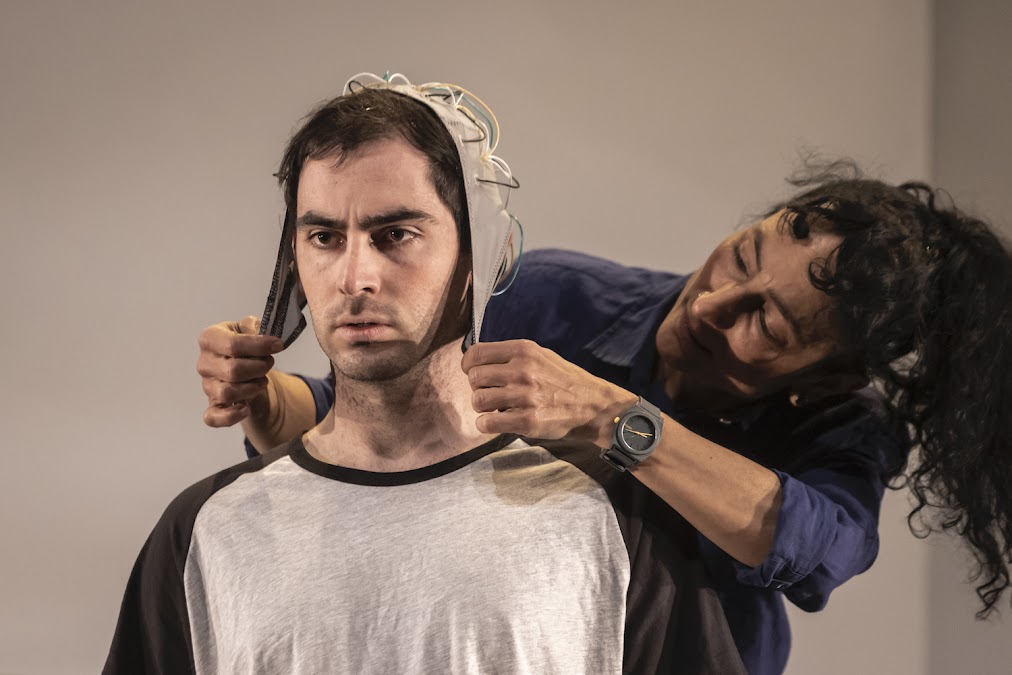 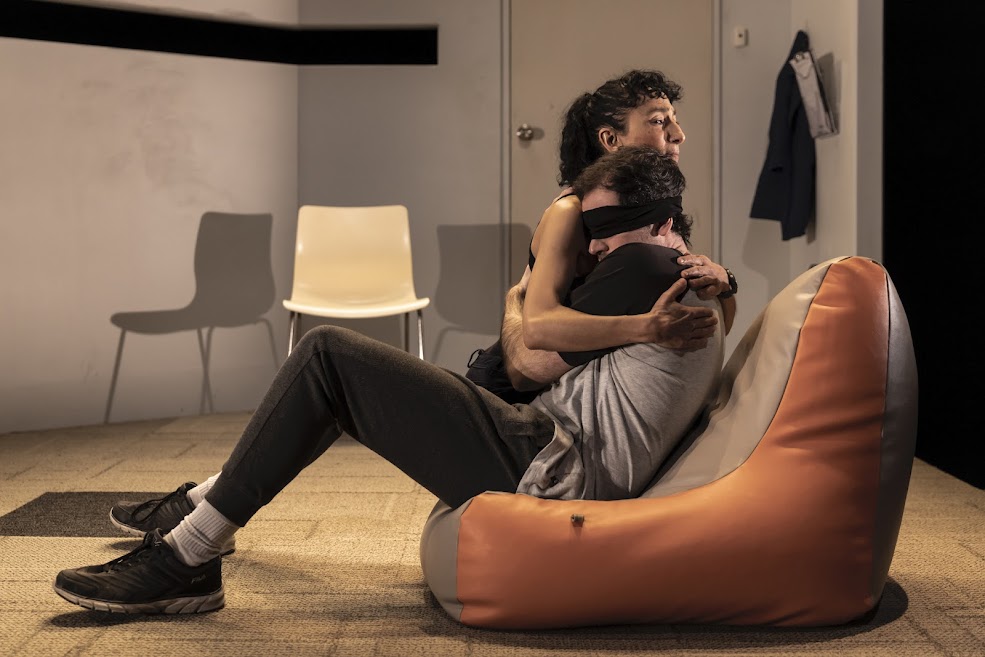 We invited Michele to write this piece as we value her voice and insight as a fellow artist and we believe there should be more critical discourse that includes the voices of women, People of Colour, and people who make theatre.

All images above by Darren Gill 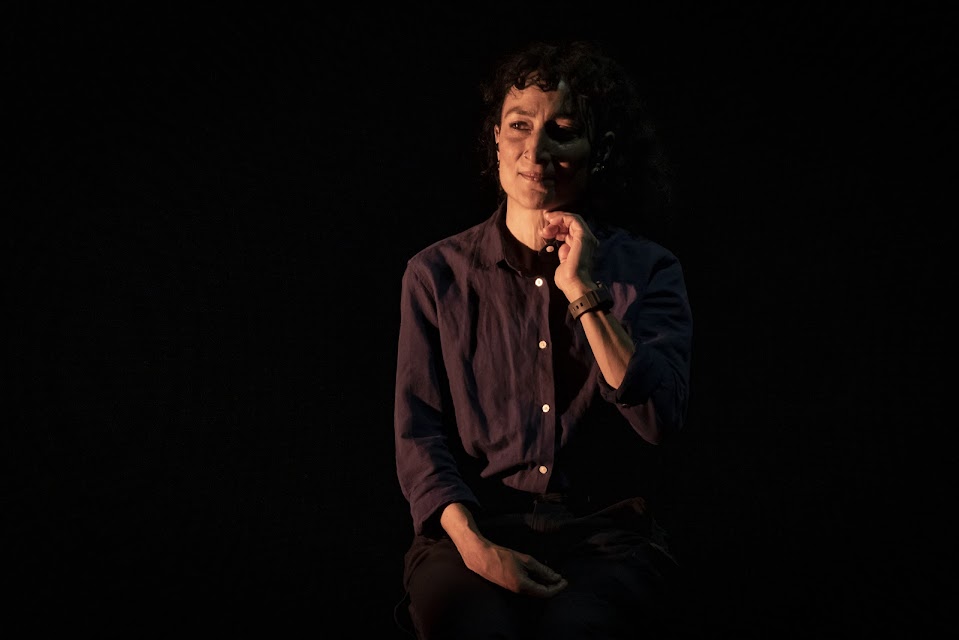 I’m not generally a sci-fi fan (nor am I a fan of historical works). I like work set in the now – not before or later – so there are already a few barriers of taste for me when I engage with a genre work like this. I know genre isn’t always meant to be a complete escape from reality and that the strongest sci fi reflects back to us contemporary concerns – in HYDRA that’s climate crisis, post-capitalist collapse, toxic masculinity. Rachel Perks gives us a vision of an alternate future world, employing new global catastrophes I haven’t seen/read in my limited foray into popular sci-fi stories, but without getting bogged down into the details of this world. Ultimately, they use this world to connect into the human consequences of mass-scale social change. The decision to place two strangers in a workplace transaction that’s also the final moments of life is mundane but profound, so it’s ripe with drama and empathy, which Rachel Perks explores deftly.

My favourite moment is when Bowen gets to undertake a VR experience, his reward for him giving up his life. As he fumbles about the consulting room with the lo-tech VR headset on his head, he sees and touches water. It’s beautiful, it’s tragic and in our COVID-infused world, his longing for water made me think about all the various longing, big and small, that many of us are aching with right now.

The team on HYRDA is new and old, in terms of working relationships. There are creatives who’ve made work together before and so have formed closer productive relationships. And then artists collaborating for the first time on this team. The Double Water Sign leadership (Bridget Balodis and Rachel Parks) on this production is evident, bringing the best out of long-standing collaborations while inviting in the talents of newer collaborators. The programmers, Darebin Speakeasy, continue to program arguably the best independent theatre in Melbourne—this production of HYDRA exemplifies this. HYDRA held a truncated season between lockdowns 5 and 6 but in spite of the loss of time and the strains of coping with uncertainty, the cohesiveness of the production is a testament to the team and the support of Darebin Speakeasy.

After the show ended, I felt so elevated with where I’d journeyed in the world of this production. Because of COVID restrictions, we all had to leave the building instead of joining for drinks in the foyer. The play stayed with me for the week. As well as loving and admiring so much of this production, there were a few things I turned over in my mind. As I mentioned, the play is largely set in real time in the one place. There is a prologue sort of moment, where we meet Anita going through what feels like a performance review happening probably just shortly before she’s due for her appointment with Bowen. Anita undergoes the performance review by phone, at her desk perhaps. A space away from the consulting room. She speaks with a workplace psychologist. The voice we hear is barely audible. Anita commands the conversation, negating any criticisms about her work approach or her efficiency. Interspliced in this phone-call are moments which I interpreted as her inner longing, where the thoughts are more heightened and the language is poetic. The imagery of water is conjured. In the prologue, we learn that Anita is seasoned in her work but has professional restlessness; the sort of crisis we can face when we’ve been in a job for a bit too long. Afterwards, as I dwelled on this production, I wondered what sort of debates the creatives might have had about whether or not this prologue sequence should stay. It was spatially separate, the language took us to a different headspace, but we did gain an insight into the ‘real’ Anita before we then see her use her various persuasive techniques on Bowen. In this sense too, we entered the story through Anita. There was an overall assuredness dramaturgically, in the direction, in the design that did connect this prologue to the rest of the play but I did wonder about how I might have experienced the work if I met Anita and Bowen at the same time. 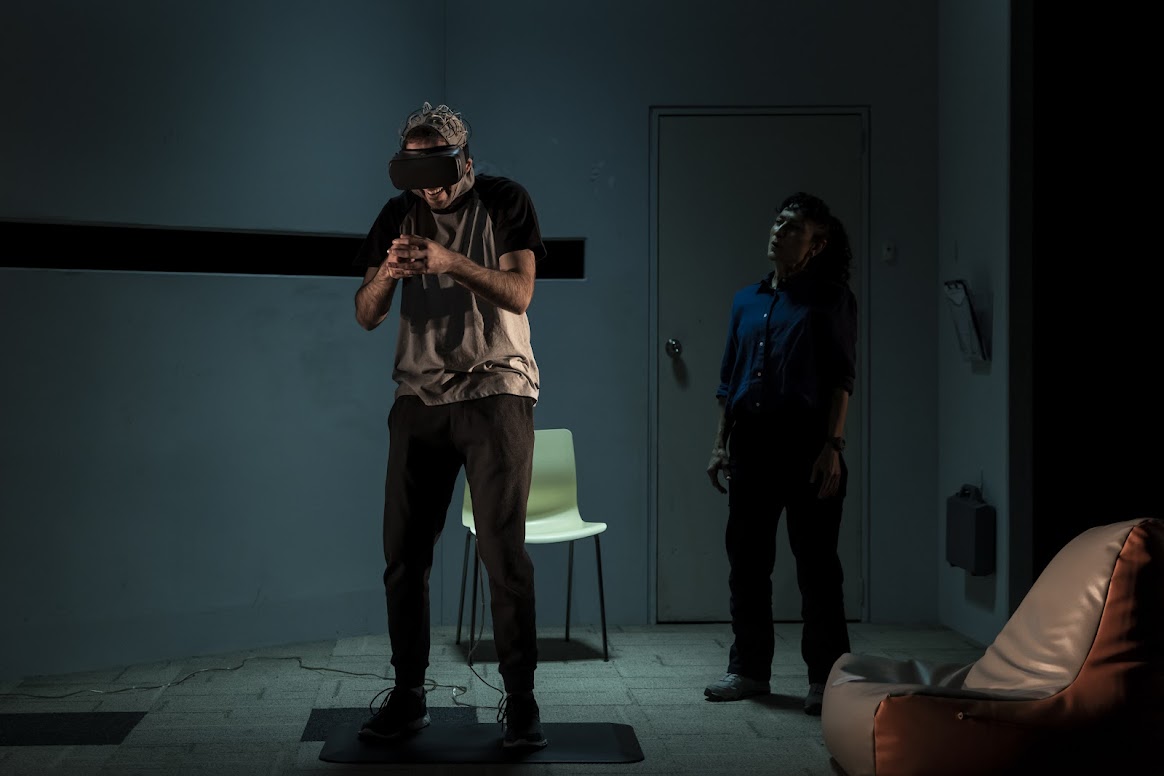 In James Lew’s set, there’s an eye-level section spliced out of the wall of the consulting room that lets us see when Anita is entering and leaving the room but otherwise remains dark and unlit. It’s not meant to be a window, I don’t think. I kept expecting that this cut-out space would transform at some point – was it some subtle metaphor I wasn’t grasping? But the more I thought about it, the more I enjoyed the slightly off-kilter edge it provided to the world.

Bridget Balodis and her team staged the bulk of the play (the two-hander section) at a distance from the audience, on a raised set. By inserting this distance, (and I assume it wasn’t a COVID-safe requirement) I watched the work in a consistent wide-frame composition, almost always seeing both Anita and Bowen and how they both responded. This is the sort of play that could lend itself to the obvious choice of the audience seated at close-range to the actors, watching them tussle, almost inside the consulting room itself, with the actors coming in and out of closer proximity. But I enjoyed that lack of proximity, of taking in the work at what felt like a more complete scale, while still immersed in the intensity of the situation.

This production of HYDRA had sharp, well-wrought text to build on, and there were so many thoughtful decisions in crafting and layering this work. I was thrilled and humbled to be able to see it and, I know it’s probably unsophisticated to say this too, but I can’t bloody wait to see it picked up for future programming.